When you go skiing in Scotland, you always take a bit of a gamble with the weather, and last weekend's jaunt demonstrated that very well. Originally, your author had planned to mark the 60th anniversary of Glencoe ski area with some skiing there. However, come Saturday morning a small party was hauled up in a cafe on the outskirts of Glasgow with heads cloudy from the previous night's festivities, to find that Glencoe was closed due to high winds. The result was a last-minute dash to Glenshee in the Cairngorms National Park for some very windy skiing. 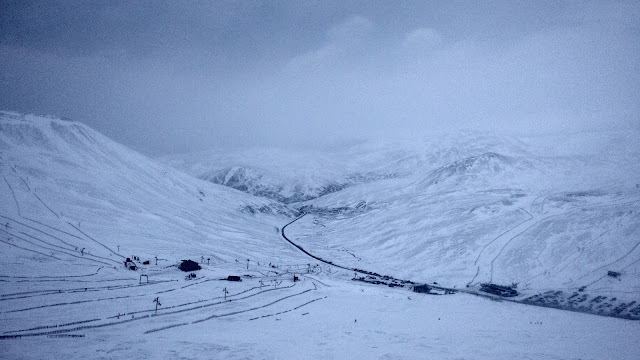 As far as British skiing goes, Glenshee is about the best we have to offer. It's our largest resort, with with 21 lifts over 4 mountains and 3 valleys, and they've been skiing here since at least the 1930s, with the first rope tows installed in 1957, with even a chairlift as early as 1962.

However, last weekend visibility was low, the wind was very cold and at one point your author planted his face in a bank of snow rather hard. It was rather a shame for those there last weekend that the week before and the week after witnessed clear blue skies,  but the runs were open and in places the snow was very good. Plus, there was one room left at the excellent Braemar Hostel, a functional dinner and ale was on offer at the Invercauld Arms and the Moorfield House Hotel in Braemar had a fire and some good whisky to warm the group up again. And anyway, skiing on the continent often has its bad weekends.

A good feed on Friday was had at Stravaigin in Glasgow's West End, the drive between Glenshee and Glasgow Airport took less than two and a half hours, and car hire is very reasonable. Ski pass and hire cost around £50 a day and the whole trip cost more than your author cares to remember.