Admire the view from Selsley Common

An area of common land overlooking the town of Stroud in Gloucestershire, Selsley Common comprises nearly 160 acres of limestone grassland with stunning views over the the Severn Vale and towards the Stroud Valleys, which once boasted around 150 woolen mills, creating cloth for export around the world. 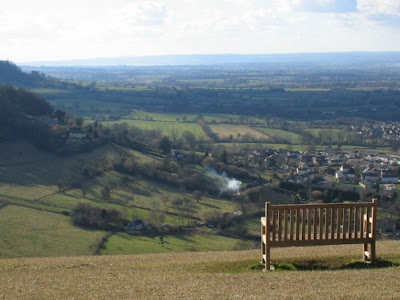 The town of Stroud is lucky to boast significant areas of common land, grazed by cattle but open to the public to roam as they please and popular with paragliders. However, Selsley is the most interesting, said to have been used as a camp and lookout by soldiers loyal to Edward - who was later to become King Edward I - during the Baron's War of 1263-67 and also boasting the remains of a neolithic long barrow called The Toots. Beneath the common, Selsley Church, funded by Sir Samuel Marling, and designed by G. F. Bodley, is celebrated for its gallery of pre-Raphaelite stained glass by William Morris and others.