It's easy for Londoners to think that the Tate empire extends no further than Bankside and Pimlico, but most will be aware that there are other galleries under the Tate banner and last week your author visited the Tate St Ives for the first time. Designed by architects Evans and Shalev on the site of a former gas works the gallery is on Porthmeor Beach and opened in a town long famous for its art in 1993. 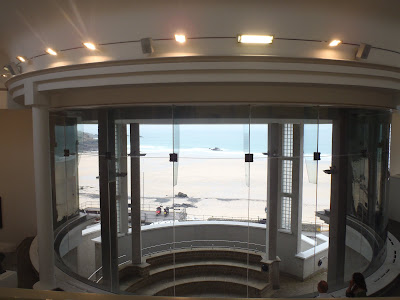 Though the block of flats being rather noisily built next door was rather off-putting, a warm welcome awaited and the current show The Far and The Near: St Ives and International Art was a good introduction to art in St Ives and how it fits with the wider world, even if the film which accompanied it was rather full of puffed-up artspeak. From there, your author continued to the Barbara Hepworth Museum & Sculpture Garden, of which more in a couple of days.