The Mappa Mundi is held by Hereford Cathedral and is a fascinating map dating from around 1285, which shows the world as it was seen in medieval times. Apparently drawn on calf skin by Richard of Haldingham and Lafford, the map places Jerusalem at the centre, with the British Isles on the outer edges of the known world. 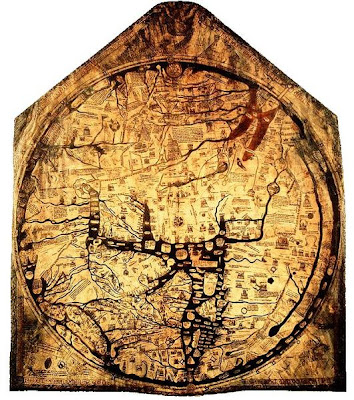 The map displays only what was known by Richard and his contemporaries, reaching no further than the River Ganges in India, the Nile in Africa and Norway and the Caspian Sea to the North, and for your author one of the most interesting aspects was the strange beasts, creatures and quasi-human animals which lurk around the edges of the map, presumably representing an acute fear of the unknown.


^Picture from the Wikimedia Commons^