Despite being irreligious, your author particularly appreciates a good church, and the tiny sandstone Church of St Mary and St David at Kilpeck, Herefordshire, is a particularly interesting one, noted for its Norman carvings which include serpents, angels, a green man, a Sheela na Gig and a menagerie of beasts including a hound, hare and ram. 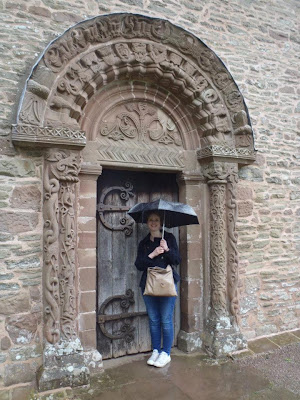 The church is entered through a spectacular Norman arch and is thought to contain remnants of its earlier Saxon foundations, and the St David referenced in its name is thought to be a local Celtic St David rather than the famous 6th century Welsh Bishop, and the name of the village itself is thought to derive from Pedic, a local early Christian hermit, Kil Peddeg thought to imply the "cell of Pedic".